Investing in the World – Part 1

True Bogleheads know the power of diversification. And yet, many such investors (including John Bogle himself!) are reluctant to diversify beyond domestic investments. Japanese investors could have perceived the same thing, with a remarkable run in the 80s in terms of market capitalization (nearly half of the world, higher than the US at some point) and in terms of stock returns. Unfortunately for Japan, as discussed in a previous blog article, this impressive success was followed by the worst equity crisis in modern history. This study about Japan also showed how some level of international diversification would have helped a local investor to mitigate this extremely painful crisis.

This raised an interesting question. Could one simply invest in the world, using global stocks and global bonds? And if this proves unsatisfying, is there a proper middle ground between domestic and global allocations?

Morgan Stanley Capital International (MSCI) started to track international markets, as a whole and per country since 1969. One can easily download corresponding monthly or annual returns, per country or per region, from this Web page. Countries are categorized according to the following system.

A couple of clarifications:

The historical returns of those 18 countries can be obtained in USD and in local currency. This provides an easy way to figure out the dynamics of exchange rates, by comparing USD and local currency data series for a given country.

Downloading the MSCI World Index series in USD currency, and using the variations of exchange rates determined by the previous step, one can easily derive the MSCI World returns expressed in each of the 18 local currencies, hence from the perspective of a local investor in each of those countries. Such MSCI World data series in local currencies will be the cornerstone of our study, just bear in mind that this is solely about Developed Markets.

The Organisation for Economic Co-operation and Development (OECD) provides a rich set of historical inflation numbers, which can be downloaded on this Web page. Unfortunately, two countries from the MSCI set are missing (Hong-Kong and Singapore). The World Bank provides the missing information (using this Web page), although one has to make a rough guess for the 1970-1981 period for Hong-Kong (the Hong-Kong dollar was on parity with the Pound Sterling by then, but this doesn’t mean that the local inflation was the same). Such inflation data per country allows to refine the perspective of a local investor, analyzing returns in real (inflation-adjusted) terms, to better compare apple to apple.

Finally, what about bonds? The Barclays Global Treasury index was created by the end of 1986 and tracks the global treasury bond market. Such (unhedged) data series can be found on Morningstar, expressed in USD. Unfortunately, earlier data isn’t available. As a rather coarse approximation, one can use the Barclays US Treasury index (here on Morningstar) for 1973-1986, with a historical extension consistent with the Bogleheads Simba spreadsheet for 1970-1972 (10-4 bond fund). The assumption is that the oil crisis in the 70s triggered high interest rates in most (if not all) developed countries, and US bond returns should be a half-decent proxy for global bonds (not great, but hopefully good enough), allowing to fill the 1970-1986 gap. Using the same approach as previously explained, one can then convert such bonds historical returns in local currencies.

Note: in Part 2 of this study, we will see the trajectory of interest rates for the various countries of interest, and the US trajectory is roughly in the middle of the pack. This reinforces the choice of US bonds as a fairly decent proxy for global bonds.

The evolution of worldwide market capitalization

Before we dive too much in numbers, it might be useful to establish some context about the respective size of the various countries, in terms of market capitalization, and how this evolved over time. The following graph from the Credit Suisse Investment Yearbook 2013 does a really nice job of illustrating such evolution, which is surprisingly dynamic. It is worth noting that the Japan market weight was larger than the U.S. for a brief period of time.

Note the extraordinary growth of the US in the first part of the 20th century (which explains the US ‘premium’ over the rest of the world for the past 100+ years as an aggregate, but careful, the existence of such ‘premium’ in more modern times, i.e. after WW-II, is much more debatable, as the graph clearly shows). 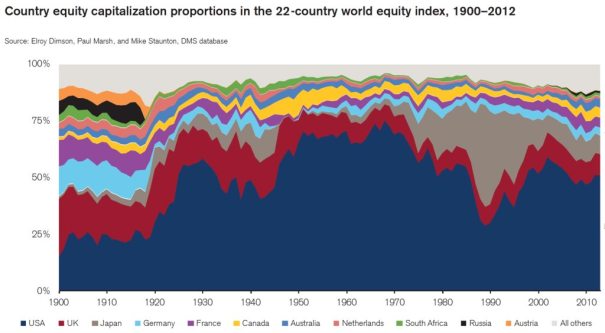 A quick look at inflation and exchange rates

Thanks to the data assembled in the previous steps, the following chart compares inflation rates and exchange rates for the 1970-2016 time period for all countries of interest. More precisely the compound growth (CAGR) of the inflation and of the exchange rate variations against the US dollar. The red square in the middle is the US. Click on the image to see a larger version of it.

We can observe a few things:

To start getting an idea about our local and yet very international investors (from the perspective of the 18 countries of interest), let’s look at what would have happened to an initial investment, from 1970 to 2016, using a 70/30 Asset Allocation, i.e. 70% global stocks and 30% global bonds. All returns track the same MSCI World (global stocks) and Barclays Treasury (global bonds) data series, expressed in local currencies. This chart is expressed in real terms (inflation-adjusted) to better reflect the actual purchasing power of each local investor.

Unsurprisingly, the US investor was pretty well positioned, with solid returns and less volatility than most. Most other countries (to the exception of Canada) suffered from higher volatility, as a direct function of inflation and exchange rates, Japan being a paramount example at the bottom right of the chart (as Wikipedia explains, Japan acted forcefully on its currency, with rather unfortunate consequences).

More disturbingly, let’s look at maximum drawdowns (in real terms, based on annual historical returns -no intra-year dynamics-), with the same asset allocation.

While the US investor and a few other countries (Canada among others) had to sit tight during major crisis (oil crisis in the 70s, Internet bubble in 2002, financial crisis in 2008/09), investors in numerous other countries would have experienced much more dramatic drawdowns with drops exceeding 50%. In Japan and Switzerland, the situation would have been especially dire. It is fair to say that currency risk can double down with financial shocks and add insult to injury.

To finish, let’s discuss a long-term form of risk (‘deep risk’ as Dr. Bernstein would put it). Let’s look at the Safe Withdrawal Rate for a retiree, assuming the usual 30 years retirement timeframe, and fixed (inflation-adjusted) withdrawals. To do so, we can look at multiple 30 years (or close) cycles, first cycle starting in 1970, second one in 1971, etc. As an attempt to better capture the roller-coaster of the early 21st century, this logic was extended to cycles up to 1994 (hence a somewhat shorter time period in some cases, always stopping in 2016). That’s a total of 25 cycles. The following chart shows the portfolio growth (CAGR) and the Safe Withdrawal Rate (SWR) for the worst cycles, for each country. The asset allocation remains 70/30.

The so-called “4% rule” didn’t quite apply, to say the least. Not only did Japan and Switzerland display an abysmal 2.5%, but a significant cluster of countries hovered around 3% to 3.5%. While Canada and Sweden did remarkably well.

Is it because of an overly aggressive asset allocation? Not really, running tests with a 50/50 asset allocation showed fairly similar results (and 30/70 would have made matters worse).

Back to inflation and exchange rates

The only varying factors in the previous charts were the local inflation rate and the vagaries of the local currency rate against the US dollar. Clearly, a higher inflation hurts real returns, and an appreciating currency does the same (all other things being equal). In some cases, one counter-balances the other, while in other cases, they ‘conspire’ against the local investor.

The following table summarizes the corresponding numbers, and concisely explains why some countries didn’t perform well while others fared much better in our previous tests. Note the horizontal conditional formatting, green is good, red is not. The third row combines (geometrically) the inflation and currency rate factors, the lower the value the better.

Now it is one thing to acknowledge the performance of the US, but who would have thought (in 1970) that Sweden and Canada would end up the winners of this little test? Guessing the future of a given country’s currency and inflation doesn’t seem any easier than guessing the future of an individual stock or industry sector.

Domestic bonds are typically used in a portfolio to reduce volatility and drawdowns (notably in nominal terms). One could question if global bonds could act as such a ballast.

Looking at a 100% global bond portfolio from the perspective of the various local investors would show volatility (standard deviation) within a range of 9% to 14%. While 100% global stocks would show volatility within a range of 16% to 22%. The difference is significant, although a bit different from the numbers that US investors typically have in mind (US bonds volatility was less than half of the US stocks volatility, at least since 1970; post WW-II was squarely different though). Clearly, currency risk and inflation risk have a significant impact on global bonds when converting to (inflation-adjusted) returns expressed in a local currency.

Here is a regular growth chart comparing global stocks and global bonds, expressed in real terms and using US dollar as currency. Using another currency would (roughly) shift the entire graph up or down. 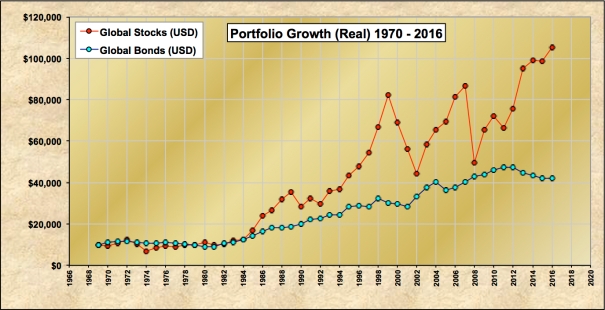 We can see that global bonds displayed decent growth, with a significantly smoother trajectory than stocks, while still displaying some level of volatility. Global bonds would therefore have been usable as a (somewhat imperfect) ballast.

The logical next step is to conduct similar tests while using domestic bonds in lieu of global bonds, while keeping global equities in the mix. This will be addressed in Part 3 of this multi-part study.

Admittedly, exclusively investing with global stocks and bonds could be viewed as an extreme position. Maybe not so much for a US investor (after all, the US represented between one third and one half of the world’s market capitalization in this time period), but definitely for most other countries.

The results of this short study aren’t terribly encouraging. One could have thought that currency risk was more of a mid-term risk, with limited impact on 30 years or more time periods. While true on average over the entire set of countries, this was definitely NOT true for multiple individual countries, including some with a very sizable economy.

Furthermore, currency risk is linked to inflation risk, compounding the problem and possibly translating into various forms of short-term and long-term damaging issues for a local investor and notably retirees. Finally, currency risk goes both ways, and who is to say that what happened to Japan and Switzerland will not happen in other countries in the future, including the US.

In the second and third part of this study, we’ll explore more balanced scenarios, with some level of domestic exposure and some level of global exposure.